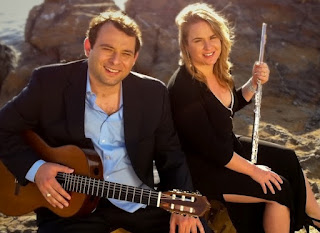 
Posted by AlmaNova Duo-The Art of Flute and Guitar at 6:39 PM No comments:

Posted by AlmaNova Duo-The Art of Flute and Guitar at 12:12 AM No comments: 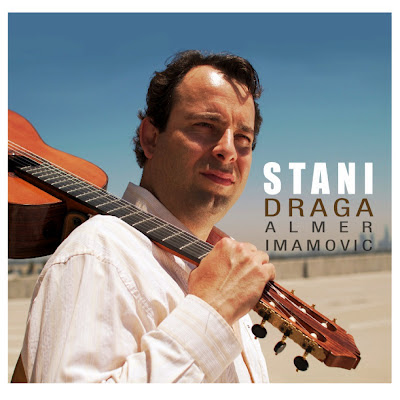 We are pleased and excited to announce the release of Almer's new album entitled "STANI DRAGA". This project has been a labor of love over the past 9 months. It features the title track song, "Stani Draga" from the film In the Land of Blood and Honey (written/directed by Angelina Jolie) as well as 10 other original songs all written by Almer.

You can also pre-order the CD (to be released in the Spring) through our website: CLICK HERE!

The album was recorded in Claremont, CA at LMP Studios with Jim Linahon.

If there’s one thing certain about the music industry, it’s that one never knows what he/she will be doing next! I experienced this first hand in 2011. In April, I was invited by a friend of mine who is in the film industry in Los Angeles to take part in an ADR session for the movie “In the Land of Blood and Honey”, produced, written and directed by Hollywood’s leading A-list star, Angelina Jolie. Because this is a movie about Bosnia and the war in the 1990’s, they needed native speakers to record some additional background dialogue. The session was truly a unique experience, one that I have never imagined doing! In fact, I almost decided not to attend for the simple reason that I am not an actor. Thankfully, my friends convinced me otherwise.

After two long days of recording shouts and screams, I had a great talk with the producer, Andrea. She was impressed with my “work” and suggested I venture into doing more of it in the future. Not to be outdone, my good friends Suki and Igor protested: “But he’s a great musician, guitarist and composer as well!” Having heard this, the producer mentioned that they actually needed a song for a particular scene in the movie. She asked me to present her with some original material and promised to give it a good listen, hoping that it just might fit their needs. I could not believe my fortune! Most musicians dream about their songs being included in any feature film…let alone one with that has anything to do with a star of galactic proportions, Angelina Jolie! This was my moment and I was not going to blow it!

So, I went home and got to work. I typically play classical music inspired by the Balkans, Bosnia in particular, written for flute and guitar. Within hours, I sent Andrea a few of my new “signature” tracks with the hopes that they would strike a chord, so to speak. She responded politely saying that she loved my music, but for the movie they actually needed something else, a “1990’s Yugo rock song”.

Well, I thought, I could certainly do that—I grew up with such music. Down deep in my soul I was actually a rock ‘n’ roll dude! So, I got back to work and in about 5 minutes (I know you will not believe me) I had a hook, a chorus, verses and lyrics that I thought were pretty cool. I immediately sent to Andrea a rough demo of just my own voice and acoustic guitar and patiently waited for her reply. Within minutes, Andrea wrote back saying that she loved the song, but she also cautioned me that she needed the final OK from Angelina herself. She promised to get back to me in the morning.

As you can imagine, I had a hard time finding any sleep that night. I was hoping for the best, but I was fully prepared for the worst. Afterall, this was something of a long shot anyway!

But wait, there was more…she especially loved my VOICE!!!! WHAT!!!???!!!! I’m not a singer! WOW, the most beautiful woman in the world loves my voice! Now, I was at the Moon. I felt special! Excited! Who wouldn’t.

Not wasting a minute, I got my studio engineer, Jim Linahon at LMP, on board, hired my bassist, Ben, and drummer, Bob, and recorded “Stani Draga” the next day. The producers were pleased with our version and decided it that should be included on the official “in the Land of Blood and Honey” soundtrack alongside U2 and Pavarotti! Please forgive me, but I must say it again: WOW!!!!

The film has since been released and I could not be happier to have been a small part of this monumental film about Bosnia and Herzegovina. I am very proud of Angelina to have written and directed this brave film, as I was impressed with her research. I spent four of my forming years in Bosnia during the war, and I could identify with many of her characters, the scenes, and the sentiment Angelina achieved conveying what it felt like to be there during such a horrific time.

This opportunity awoke something else inside of me that I have been ignoring for most of my life in Los Angeles: my heart is still in rock and roll music. While it is true that I love the classical idiom, my love for the sound of a band is far greater. The recording sessions went so well that we all decided that we should continue working on a whole album.

Ever since that fateful email in mid-April, I have been writing lyrics, strumming chords on my PRS, and fooling around with rhythm machines, all this in order to complete a project that only a year ago was but a distant dream. Thanks to my friends, producer Andrea, and Angelina, I have taken a detour along my musical path, and I am very excited about the possibilities it may lead to.

Posted by AlmaNova Duo-The Art of Flute and Guitar at 11:48 AM No comments:

Are you a business owner and would like to hear AlmaNova and other similar artists in your place of work? Well, now it's possible thanks to MoodMixes.com and Magnatune. Our music will be featured on their unique playlists that offer a wide range of styles perfectly suited for any business venue. At moodmixes.com, you can find the ideal background music for your restaurant and bar, and music for retail and in-store music. Please check them out!
moodmixes.com
Posted by AlmaNova Duo-The Art of Flute and Guitar at 11:50 AM No comments: