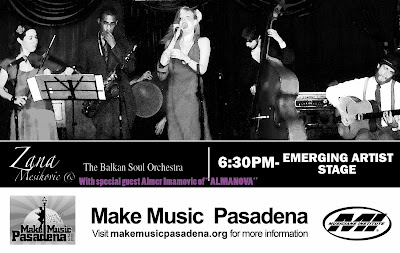 BUT, we will not be playing them together! Bummer!!!

For those of you in the Pasadena Area, please come see Almer play with the FABULOUS Zana Mesihovic and the Balkan Soul Orchestra. Almer is her special guest and they are performing in the annual Pasadena MakeMusic Festival.

For those of you on the Westside, you can come to hear Jessica perform at the Live at the Lounge concert series in Hermosa Beach. She is happy to be a part of the West Coast premier of Stig Jonas Petterssen's opera, A Dream Play (Dromspel).

See you there!
Posted by AlmaNova Duo-The Art of Flute and Guitar at 7:29 PM No comments:

Please read this great review of After Hours from Australia's premier flute magazine, Flute Focus written by Cathy Wainwright on May 21, 2010.

If you want to be inspired and uplifted then this is the album for you! The infectious rhythms and haunting melodies of folk tunes from Macedonia and Imamovic’s native Bosnia reflect the gamut of human emotion from sadness and pain to hope and belief in the future.

Flute and guitar duo Alma Nova present in this their third album, their own compositions and arrangements linking traditional folk themes of love, loss, sadness and the search for peace, tranquillity, and hope, with events in their own lives, giving the album a very personal focus and expression. The energy, passion and sincerity of the artists shine through in every track.

Every track has a freshness and a personal investment in the music which is sometimes missing in recordings of mainstream repertoire. The title After Hours expresses the idea that this is the music the artists choose to play when they have finished rehearsing or playing their ‘classical repertoire’ – truly music from the heart.

Flautist Jessica Pierce, a graduate of the famed Eçole Normale de Music de Paris, plays with effortlessly flowing melodic lines that range from sensuous to plaintive and wistful. Guitarist Almer Imamovic is likewise a master of his instrument, and together the pair form a perfectly balanced duo. Overdubbing of additional parts on some tracks adds to the depth and interest without compromising the balance.

But don’t take my word for it. Have a look at their attractively presented website where you can not only hear sound clips, but also follow links to YouTube videos of their performances. Their YouTube video of Massimo Dancing, with guest artist Jim Walker (Jessica’s current Doctorate supervisor) is fantastic! And if you are anywhere near the NFA Convention in Anaheim CA in August be sure to catch them performing there on the 14th.

This CD will certainly be an addition to my iPod!

Able Seaman Musician Cathy Wainwright is a Flautist with the Sydney Detachment of the Royal Australian Navy Band, and was one of the first group of women to serve in the Royal Australian Air Force Band. Cathy holds a MMus from the University of New South Wales, a Fellowship Diploma in Flute Performance from Trinity College, London, and has extensive flute teaching experience both privately and in schools.

This duo met while studying at the Ecole Normale de Musique de Paris and have toured North America, Mexico, France, Eastern Europe and the U.K.

This disc encompasses Imamovic's original compositions and arrangements of love songs from his native, Bosnia. Many of the tunes are instantly hummable, they have a musical simplicity which is charming and whether originals or arrangements, Imamovic has done an exceptional job throughout. Mixed in with the sentimental sounding tracks are several up-tempo ones which really get the feet tapping (especially notable being the final track where both players are, one assumes, double tracking) and a couple of well-played guitar solos, too. There is not really one low point in the whole program, all the pieces are of a most attractive nature and are well performed by this ably equipped duo.

The recording quality is of a high standard, the presentation lets the side down a little though with just a one-sheet insert containing little information about the duo of the music, for that, you have to visit their website.