Review of "After Hours" in SOUNDBOARD Magazine 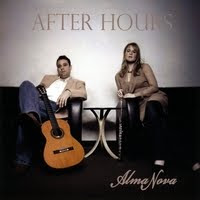 Review of After Hours from AlmaNova (Jessica Pierce, flute and Almer Imamovic, guitar)

Two earlier discs by AlmaNova were well received here and this one is also very engaging. Much of it involves the infectious mixed meters of Imamovic’s native Balkan region, but there are also pieces of a very intense, sinuous and melodic beauty. Some are original works by the duo while others are arrangements. It all holds together very well. It begins with Bosna Nova (no, it’s not a misprint) with the guitarist multi-tracked on steel string and classical guitars, a texture used repeatedly and effectively on the disc. (The flute is also multi-tracked occasionally.) Among my favorite cuts are the fourth, Zajdi, Zajdi, a hauntingly beautiful melody, and the sixth, Jovano, Jovanke, which the notes call “a highly energetic arrangement of an old traditional Macedonian folk song.” Yes, indeed. The energy is aided by very nice percussion work by the guitar. Massimo Dancing, inspired by the artist’s nephew, is another gem. These are very sophisticated arrangements for flute(s), guitar(s), and percussion: the musical structures, though miniature, are impressive. Liner notes and recording quality are fine. I enjoyed this disc very much. In fact, it made me want to grab the guitar and start improvising in 7/x. Luckily there was no one to hear the result!

Posted by AlmaNova Duo-The Art of Flute and Guitar at 8:53 PM No comments: 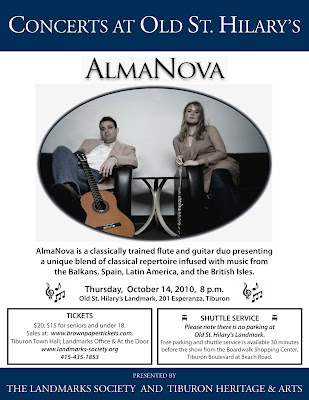 Posted by AlmaNova Duo-The Art of Flute and Guitar at 8:14 PM No comments: