A Journey for Flute and Guitar - ALMANOVA DUO
Saturday, January 28 at 7:30 p.m.
11760 Gateway Blvd., Los Angeles, CA 90064
Tickets: $10 in advance, $15 at the door
Buy Advance Tickets Online!
www.gatewayperformanceseries.org
Posted by AlmaNova Duo-The Art of Flute and Guitar at 11:00 AM No comments:

Posted by AlmaNova Duo-The Art of Flute and Guitar at 11:17 PM No comments: 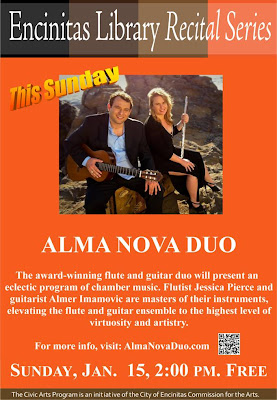 The next concert presented by the Commission for the Arts is this Sunday, Jan. 15, at 2:00pm and features the outstanding flute and guitar duo, ALMANOVA; in a program of music by Ravel, Ibert and Imamovic.

Encinitas Library, 540 Cornish Drive , Encinitas , CA 92024 . Parking is available at the library, on the street, or at City Hall, west of the library. The concert is free of charge.
Posted by AlmaNova Duo-The Art of Flute and Guitar at 7:49 PM No comments:

Posted by AlmaNova Duo-The Art of Flute and Guitar at 10:50 PM No comments:

Musically speaking, 2011 was a very exciting year for the two of us! It was certainly the year of travel...we performed all over the US with concerts in Chicago, Monterey, Santa Cruz, St. Louis, San Francisco, San Diego, Los Angeles, Las Vegas, Charlotte, and Phoenix. In addition, we performed in Europe 3 times! A special thanks to everyone who came to our concerts....with out your support we could not be doing what we love. This year, we were pleased to have collaborated on a CD with Zana Messia and the Balkan Soul Orchestra, to be released in the Spring. The newly formed dynamic duo, ALMER&NIRVAN, released their album last fall. In addition, Almer released his solo guitar CD: The Sarajevo Sessions as well as our very successful Christmas Album! 2011 gave us quite a few surprises as well. In the music business you never know where your career will go next. We have been always open to any possibilities for musical growth and development. Almer's work on the film In the Land of Blood and Honey was completely unexpected and ended up being quite an exciting high point of 2011. This project has inspired Almer to continue exploring his "other side" and will be releasing a new rock CD in the next few months. We also have plans to release our highly anticipated album "Journey" as well as record a new CD of the music of J.S. Bach.

CHEERS!!!!
Posted by AlmaNova Duo-The Art of Flute and Guitar at 7:16 PM No comments: