Hi All!
For those of you who missed our recent performance, here is a taste of what went on!  We played with a fabulous group of musicians and had a very warm and generous audience.  The highlight of the night was when my flute professor from USC, Maestro Jim Walker, joined us on stage to help us premier one of our new tunes "Massimo Dancing".  Please enjoy this clip of a true master flutist and unparalleled musician...we feel so honored to have had this experience!
Thank you, Jim!!!!
ps...to see more of this great evening of music click here
Posted by AlmaNova Duo-The Art of Flute and Guitar at 9:54 PM No comments:

Posted by AlmaNova Duo-The Art of Flute and Guitar at 6:59 PM No comments: 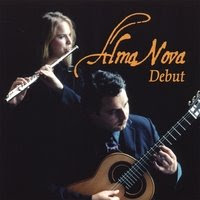 AlmaNova is a flute and guitar duo comprising Jessica Pierce and Almer Imamovic.  It was formed during their studies at the Ecole Normale de Musique in Paris.  The folk-influences music on this disc includes Imamovic's arrangements of the traditional Bosnian works and his own compositions.  It is not clear from the sleeve-notes which are which, as there is no individual information about each track other than the listing on the back.
Sarajevo Nights is an upbeat track, with percussive definition and a florid flute melody.  This track gives the disc a strong opening, well-written for the instruments and allows both players to shine.  The playing from both of those performers is idiomatic and immediately demands attention.  Moj Golube is a moderately paced ballad with a lyrical melody given well-chosen ornamentation.  The opening of Uzeh Djugum i Mastrafu is haunting beautiful, with rich, dark flute tones heard over tremolo guitar.  The mood lightens, and a poised dance follows.  Theme for Carolyn moves through several changes of mood, with a simple melody line varied through the use of different accompaniment style on the guitar.  Scott's Guitar is a beautifully performed solo for guitar, while Tapkalica is another fast, rhythmic track, with repeated melodic patterns building the momentum to a frenzy.  La Nuit avec P.K. is another languid guitar solo which develops into a toccata-like dance with a punchy groove.  The exotic Jamilla's Dance has a Dance of the Seven Veils quality to it, with Pierce's seductive pitch bends demanding attention.  Dinner with J.D. features multi-tracked flutes in a piece which has a more western-pop style - parts of this track reminded me of Kenny G - than the rest of the disc.  The Bosnian roots return for the final track, Song for Marcus, in a fast paced dance, which also features some multi-tracking.
This is an enjoyable disc which adds an interesting dimension to flute and guitar repertoire.  Those players are clearly passionate about their choices of repertoire, and Pierce makes excellent use of ornamentation in her playing to give a sense of drama to otherwise simple melodic lines.  Both players have excellent technical control and they have a wonderful report as a duo.
-Carla Rees, MusicWeb-International.com
Posted by AlmaNova Duo-The Art of Flute and Guitar at 1:31 PM No comments: