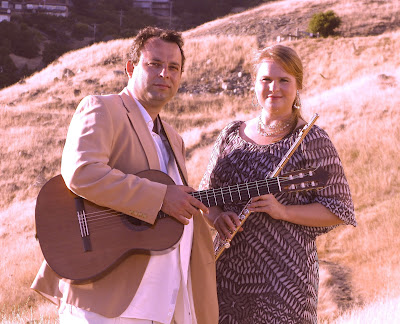 The award-winning ensemble, AlmaNova, is an innovative flute and guitar duo presenting an eclectic program of chamber music. Flutist Jessica Pierce and guitarist Almer Imamovic are both masters of their instruments elevating the flute and guitar ensemble to the highest level of virtuosity and artistry. Their live performances are filled with energy and passion creating a “...graceful, intuitively choreographed display of seamless connection.” (Fresno Beehive).
AlmaNova met in France while studying at the famed Ecole Normale de Musique de Paris. They continued their graduate work at the Royal Welsh College of Music and Drama and the USC Thornton School of Music. Since then they have had the privilege to perform extensively throughout the world including recitals in Paris, London, Sarajevo, Stockholm, Tijuana, San Francisco, Los Angeles, Chicago, New York, Kansas City, and San Diego. In 2014, AlmaNova will begin their first tour of Japan.
AlmaNova’s music has been featured for various film and TV projects including Chuck, Human Target, and From Mexico with Love. Most recently, Almer’s song “Stani Draga” was chosen for the film In the Land of Blood and Honey, written and directed by Angelina Jolie. Most recently, Almer was honored to perform for former Vice President of the United States, Joe Biden and the Bosnia-Hercegovina Advisory Counsel in Washington D.C..
AlmaNova’s recordings have been described as “...pure musical pleasure” (Flute Focus Magazine) and have received much critical acclaim. Their first CD recording 'Debut' features original works by Mr. Imamovic inspired by the sounds and folk melodies of his native Bosnia. It was recently honored by the largest worldwide independent music organization, Just Plain Folks, receiving Best Instrumental Album, as well as Best Instrumental Song, for ‘Sarajevo Nights’. Their second CD, ‘Classic Giuliani’ was awarded Critic's Choice, by American Record Guide calling it “...some of the best [Giuliani] I've heard”. ‘After Hours’, explores the music of Macedonia through thoughtful arrangements and more original compositions by Mr. Imamovic and Ms. Pierce.  In2012, they released their first holiday album “AlmaNova: The Christmas Album” featuring original and inventive arrangements on beloved Christmas classics.
AlmaNova Duo’s BLOG, “A Musical Journey” was #20 in the “Top 30 Flute Blogs on the Planet” by Feedspot.
Jessica plays Sankyo Flutes and Almer plays Jose Oribe Guitars.

Posted by AlmaNova Duo-The Art of Flute and Guitar at 10:00 AM No comments:

Posted by AlmaNova Duo-The Art of Flute and Guitar at 5:05 PM No comments:

AlmaNova Duo BLOG has been rated #20 in the WORLD for the top flute-related blogs and websites!!!

NEWS!!!! Our AlmaNova Duo BLOG has been rated #20 in the WORLD for the top flute-related blogs and websites!!! Check it out if you haven't already! We are honored!https://blog.feedspot.com/flute_blogs/ 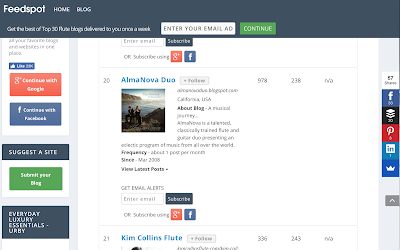 Posted by AlmaNova Duo-The Art of Flute and Guitar at 8:26 PM No comments: